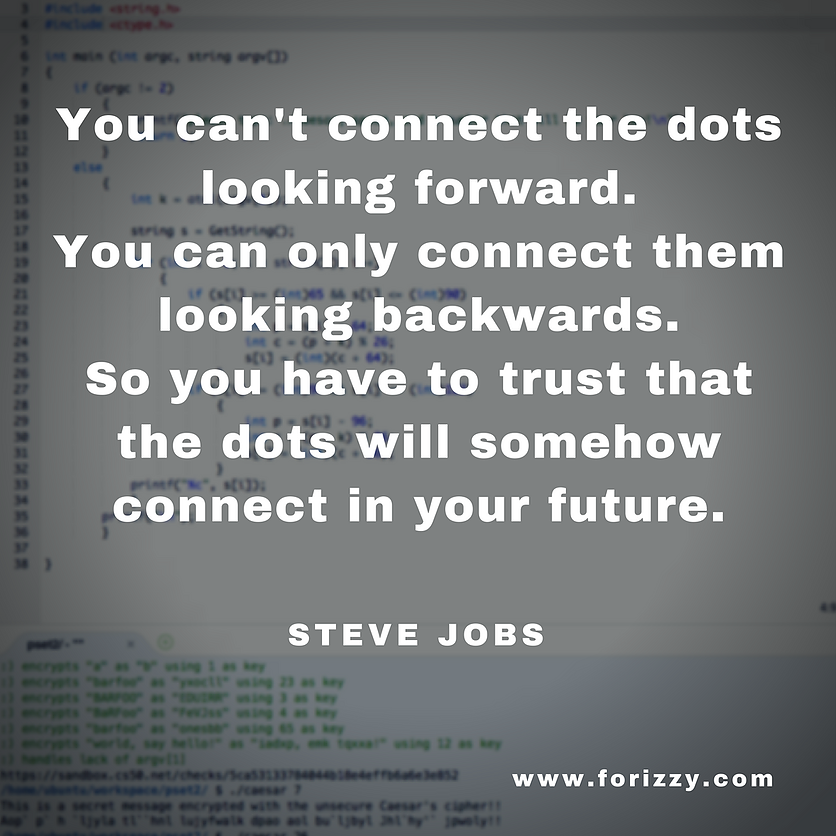 So I’ve been taking some coding classes in the past while – learning C from the ground up and Python, while brushing up on my HTML and CSS (my knowledge of web design akin to a redneck auto repair – not really knowing what you’re doing, but doing it anyway as long as it *seems* to work)

And one math concept that suddenly reared its head to be completely relevant to coding is modular mathematics (I won’t get into it) – something that I had learned as part of an elective math course I took in college more than 20 years ago.

Never would I have thought back then that I would be using it now. The whole notion of connecting the dots forward, which is something that really struck a chord with me in Steve Jobs’ commencement speech at Stanford (if you’re one of the few people who hasn’t seen it in whole or in part, it’s worth the time).

So much of what we end up doing, what we discover in ourselves, the opportunities we get and the choices we make, are all non-linear. You can’t, in advance, plan for X + Y to equal Z.

Otherwise, this economics major in college two decades ago wouldn’t be making films and studying computer coding on the side. I used to say that studying economics was the biggest waste of my time, because I learned nothing from it (and to this day, I’d recommend most people to stay away from it – it’s like learning “theoretical business” rather than actual business). But in a way, learning nothing from it may have led me astray through the right kind of seemingly unrelated detours that led me to where I am today.

In hindsight, things make sense in a way that they don’t when looking ahead. All those years as an actor sowed the seeds for what I do today as a director, helping me in ways that I never would’ve anticipated (and yes, I am one of those directors who LOVE working with actors). Writing a story every day for class in the third grade sowed a deep seated desire for storytelling that never really went away, even if it was dormant for periods of time.

All those seemingly unrelated interests, experiences, and even obligations become interrelated in the end in some way.

CAPTURED ALIVE
THE FUTURE OF FILM?
←
→