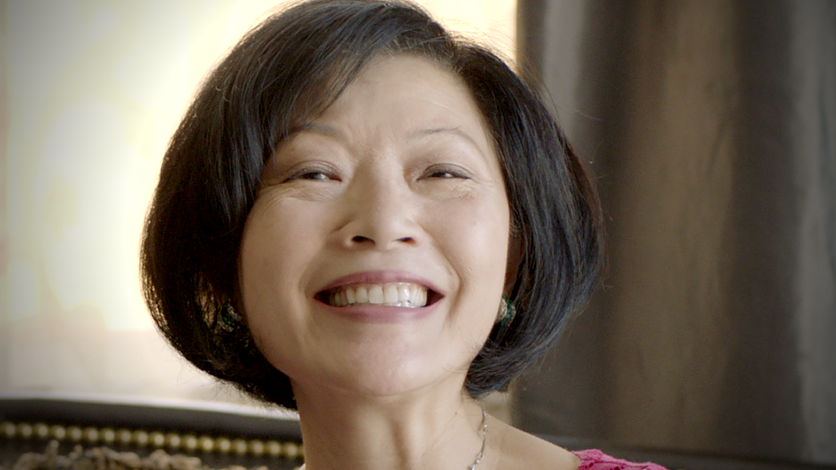 I got the news on Wednesday morning May 23rd that Elizabeth Sung had suddenly passed away the night before. As of this writing, while I’m still processing and struggling to write about her in the past tense, I wanted to share my thoughts on a person who has meant so much to me.

A few years ago, I was standing in line at the Austin Film Festival waiting to sit in on their many discussion panels with seasoned writers. Rather than stare into my phone, I started talking to the woman behind me about our films, what projects we were working on, and all the small talk that comes with introducing one’s self at film festivals. When I spoke about a script I was writing (which would later become FOR IZZY) and mentioned Elizabeth Sung’s name, her eyes immediately lit up and her face brightened.

“She was my acting coach!”

Seeing on a consistent basis people brighten up so spontaneously at the mention of Elizabeth’s name epitomizes the kind of impact Elizabeth has had on so many of the people she came in contact with.

Elizabeth was a true pioneer who paved the way for so many Asian-American filmmakers and artists – not just as a source of inspiration, but as a tireless mentor and relentless advocate for those coming up in the industry. The outpouring in the days after her passing from seemingly every single Asian-American in film and theater is a testament to the impact and legacy she left behind. I am a part of that legacy.

I first met Elizabeth over Skype on recommendation from another veteran actor Jim Lau, when I was looking to cast one of the leads on my first feature YES, AND…

From the very first moment she appeared on our video call, I was struck by her presence. She carried herself with a dignified grace that was lived in, without a hint of pretension – like an old school movie star, in the best sense, and yet so completely at ease on Skype. About five minutes in, when she sensed that I had no idea what I was doing on the call, she gently and subtly, without me noticing at the time, turned the Skype session into an opportunity to coach me on how to pitch a project to an actor, using her trademark questioning to bring out what she felt I should be revealing about the project. With the crispness and clarity of her theater-trained voice that was directed at me with full intention, she extracted out of me the key reasons why she should or should not sign on to do the film.

Those questions would continue through both feature films I would end up working on with her. Elizabeth loved to ask me questions – about every nook and cranny of the script, the production schedule, wardrobe, festival submissions, distribution and so forth. At times, it was overwhelming. She was persistent, fierce and relentlessly curious – traits that undoubtedly allowed her to have such a long career over the decades before Asian-Americans were even on the radar in the popular culture. But I never got a sense that she was hardened by the toll. She remained open and vulnerable when she could have easily withdrawn behind the veil of status and renown. Instead, she wrapped her strength in kindness, compassion and concern. Her resilience and candor always came from a place of love – refusing to be defined by the dragon ladies she’d often play on screen, or the sweet cat lady she could be mistaken for because of her kindness off screen (and yes, for her love of cats) – but instead, insisting on seeing her as she is.

She loved the work. And the work loved her, as she was near impossible at times to schedule because of the demands on her time. But what struck me was her seemingly boundless generosity. Rather than accumulate her experiences and withhold them from a place of scarcity, she shared them from a place of abundance. She went out of her way to connect the people she knew, respected and loved. Like a matchmaker for artists, so many people I know and have worked with started with a mutual introduction from Elizabeth (and she would follow up to make sure that we connected) – including the cinematographer for FOR IZZY, Irvin Liu, whom she somehow knew in advance that we would bond right away.

There is a special kind of relationship, or bond, between a director and actors that is hard to put into words, other than to say that it transcends our opinions for one another – it’s like we know each other too well for like-dislike or love-hate to even matter. As storytellers, our currency is emotion, and we bring in our own personal experiences and earned wisdom to shape those emotions into a story that audiences can relate to. In plain English, the work is deeply personal – and over multiple projects, both actor and director are whispering from certain hidden corners of themselves that the people in their own personal lives may not even get to see. It’s through storytelling that we are able to transmute the most intimate and vulnerable aspects of ourselves.

Working with Elizabeth helped expose those very corners in me. I tend to (try and) write from a personal place, and Elizabeth’s deep dives into the characters she played on my films gave her that window into who I am. During the prep and rehearsal process for YES, AND… Elizabeth would often send me long-ish but deeply personal emails about what was really going on with the characters, and encouraging me to go further, exploring those corners in the dark she knew I wanted to share, but was too afraid to share.

Elizabeth had given me that key and pointed me to open that door more fully to expose those very corners, and FOR IZZY became that evolution of what I was at the time too afraid to fully explore on YES, AND… by facing my own demons and deepest fears. (As an aside, exactly two years ago as of this writing was Day 1 of principal photography on FOR IZZY). Without YES, AND… there would be no FOR IZZY, and without Elizabeth there would be neither, and I would not have uncovered the growth that needed to happen in me, which she encouraged me to fully explore, when I wrote the character in FOR IZZY solely for her.

The last time I saw Elizabeth was at the Los Angeles Asian Pacific Film Festival (LAAPFF) for the screening of our film, just two weeks before her passing. I met her husband Peter at the theater lobby – Elizabeth being uncharacteristically late and arriving separately. I had seen Elizabeth a week before, sitting beside her and Peter at the opening night film, SEARCHING. She seemed frail, but in great spirits. I knew she was ill, and mentioned to Peter that she didn’t have to do this and should probably rest – she had already seen the completed film (we had a private cast and crew screening at Raleigh Studios) and that there would be other opportunities.

“She was adamant about coming. She wouldn’t miss this for the world,” a normally soft spoken Peter stated firmly.

And I’m so glad she did. She would be too modest to have said this, but even while we were still editing the film, I stated emphatically to her that this ranks as perhaps one of her best performances in her long career. She was able to not only see the completed film on the big screen, but to also bear witness to an appreciative audience and recognition for her performance. The way in which she was so deeply present, giving her full attention, moment-to-moment, to every question that was asked, as well as to everything she said with such clarity and compassion during the Q&A after the screening, is something I’m so gratified for the audience to see, because that was the Elizabeth I knew.

Depending on the release schedule of the other recent projects she has been in, FOR IZZY could very well be her last feature film. Regardless, knowing how much she loved the work and, just as important, how much she cared about paying it forward to the next generation, there is no better Act III in her life’s work than her performance on FOR IZZY. Especially given the parallels between her character’s narrative in the film in passing on the hopes and dreams to the next generation (in the film, it’s the character’s daughter), and her own journey as an advocate for younger actors and filmmakers, encouraging (and at times pestering in a loving way) so many of us to connect with one another, support one another, and to stand up together as a collective voice. The fact that she was able to see our community begin to come into our own over the last few years is something I’m so gratified to see her witness. At its core, the film is about the power of love and friendship, which are the very aspects that Elizabeth cherished so much in her own life.

FOR IZZY is dedicated in loving memory of you, Elizabeth. May you rest in peace knowing that your legacy lives on in just about every Asian-American working in our industry.

To honor Elizabeth’s legacy, her family in partnership with Visual Communications (home of LAAPFF) has established the Elizabeth Sung Memorial Scholarship Fund. Proceeds will be used to expand opportunities for emerging Asian-Pacific-American talent.

Donations can be made online here, or

By check payable to “Visual Communications” (indicate “Elizabeth Sung Memorial Scholarship Fund” in the memo line) and mailed to:

PAVING THE WAY
ACTS OF COURAGE
←
→